Hidden away in the planning application for the Skanska development around the new Northern Access Road to Cambridge station are detailed proposals for the redesigned cycle access to the western end of Carter Bridge:
http://idox.cambridge.gov.uk/online-applications/applicationDetails.do?activeTab=documents&keyVal=MPYVR2DX08L00
[Scroll down to 'CARTER CYCLE BRIDGE WESTERN ACCESS IMPROVEMENTS'.]

My concern is that the new junction with the bridge on-ramp will be difficult and dangerous to negotiate for cyclists and pedestrians. With 450 cycle movements towards the city at peak time, this will be a busy junction where cyclists are moving rapidly as they descend the slope. Those cyclists heading for the station will have to break hard before turning across the path of oncoming cyclists and across the footway in order to join the new link path.

This is undoubtedly an improvement on the existing arrangement (which involves crossing Devonshire Road twice to access the station), but two options that seem to have been considered in the past but rejected would be safer and more convenient:

1) Opening a route via Ravensworth Gardens through the existing wall at the boundary of the station car park.

2) Adding a cycle-only ramp joining the south side of the bridge opposite the stairway. 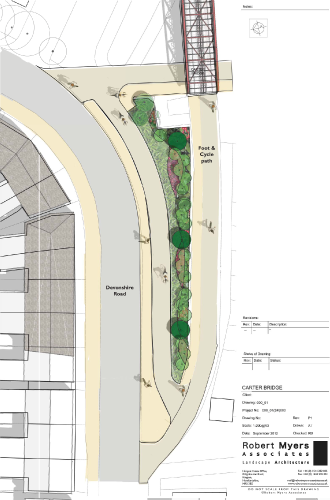