a. CS9 is referenced many times in the document (such as p.31 "The implementation of CS9 would create opportunities for new orbital routes into neighbouring residential areas and transport hubs").however it is also sometimes qualified by "if approved" and proposals will have dependencies upon CS9 going ahead.
b. We get a mention on p.31 "Local groups such as the Hounslow Cycling Campaign can provide important knowledge on local demand and suggestions for improvements." Yey!
c. Section 3.1.4 and Appendix D reference Propensity to Cycle tool results for the borough.
d. Section 3.1.5 references cycle routes to Heathrow. While Heathrow airport isn't within Hounslow, it is the largest employer of borough residents. Our guess is that additional funding from TfL and Heathrow will be required to address Heathrow cycle access.
e. Section 3.1.6 references a cycle network for the borough. This is the first time we have seen reference to a "Hounslow Priority Cycle Network" as previously, projects have been disconnected individual projects. CS9 provides the "spine" for this network.
f. There is reference to 2 Liveable Neighbourhoods bids for Feltham and Dukes Meadows. We have heard that "Dukes Meadows" will actually be called "Chiswick South" in the bid. The details of these bids are not within the LIP but we have heard the "Chiswick South" bid has a mixture of public realm improvement, school streets and creation of filtered permeability cells in the Grove Park area of Chiswick. 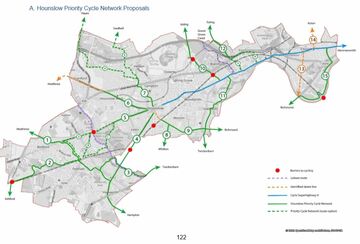